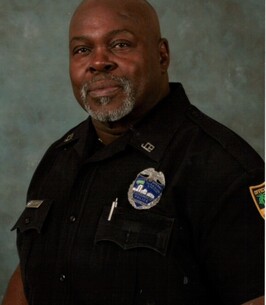 Purman Jackson Jr. entered this world on April 16, 1956, born to Mr. and Mrs. Purman and Berthenia Jackson, Sr., in Ocala, Florida, and was reared in a large, loving family.
At a young age, Purman (P.J.) accepted Christ as his Savior, and was baptized in Mt. Canaan Baptist Church by his grandfather, Rev. Moses Snowden, Pastor. After graduating from Vanguard Senior High school, he enlisted in the United States Army. Purman served for a period of four years before being Honorably Discharged.
His first civilian employment was as an A/C repair serviceman for a short period of time.

In September 1985, Purman (P.J.) began his career as a member of the Jacksonville Sheriff’s Department, starting out as a Patrolman; later becaming a Burglary and Robbery Detective as well as being assigned to the Criminal Apprehension Team (CAT Team) and the Technical Support Unit (T.S.U.). He remained in T.S.U. until the end of his career. He retired in December 2016 after serving 31 years with this agency.
In 2018, he joined the Duval County School Board Police Department and served as an Officer for several weeks before deciding to transition to the Florida Division of Alcohol, Beverages, and Tobacco (A.B.T.) as an Inspector. In April 2022, due to health reasons, he resigned from his position as an A.B.T. Inspector.
On Wednesday, May 4, 2022, Purman Joel Jackson, Jr., gave up his citizenship on this earth, to enter into life eternal where the wicked will cease from troubling, and the weary will be at rest. P.J. was a wonderful husband, father and friend. He was preceded in death by his parents, Mr. and Mrs. Purman Jackson, Sr.; wife, Ruby K. Jackson, mother of Purman III and Daniel; sisters, Gloria Jackson Cruel and Beverly Jackson; brother Edward “Dennis” Jackson; grandparents, Rev, and Mrs. Moses and Clinnie Snowden, and Ms. Candia Grimes; and uncle, Benjamin Snowden.